We're all here because we share an interest in building scale models of "big rigs".... semi tractors, straight trucks, wreckers, transit mixers, logging trucks.... or whatever particular subject(s) may light your fire. But for me, a lot of this is new. While I've always had an interest in pretty much all types of machinery, and have been building scale models since the age of six (which was a time much further in the past than I'd like to think about), I have only really gotten into modeling the subjects we showcase here in the last few years.

In fact, it was not until 2009 when I built my first semi tractor model. That's just over one decade after building my first model ever.  Sure, I'd dabbled with a few, and I'd done a few medium duty truck models, like a Ford C-600 stake bed, but I'd never built an honest-to-goodness semi until I picked up the reissued White Freightliner Dual Drive kit from the now-defunct Hulings Hobby House in Alma, Michigan. I don't know why... the box art makes the WF look so unappealing with it's yellow and brown color scheme, but something about it just jumped out at me. So... home with me it went. Wasn't too long before I had it built, and even though it's a mess of a model, it still sits on the shelf, and I'll never change it or redo it unless it gets damaged somehow. It was Numero Uno, and it was what got the ball rolling.

Here it is... in all it's glory. I learned a lot on this one, what to do and much more importantly... what NOT to do!

It wasn't until 2012 when I really got serious about them again, and that's when I started accumulating kits at an alarming rate. I have to say there was a method to my madness. I thought "Truck models cost more, and take up more room. Maybe that will help me keep tabs on the stash, because I won't buy as many kits due to those factors." I couldn't have been more wrong! I've finished quite a few this year... more than at any point up to now. I even did a second Dual Drive as a Michigan Special. Since I was never happy with the first one, I always vowed to pick up another DD and "do it right this time". 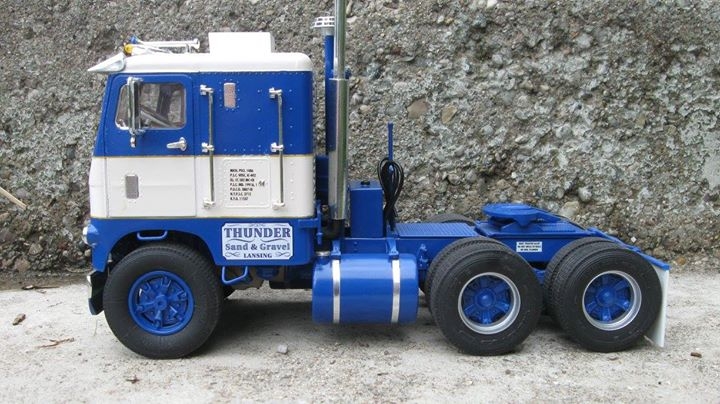 And I have to say the Dual Drive isn't my favorite subject, in 1:1 or small scale form. But here I am, with two built, and two more in the "I'll Get To It" pile. If I actually like the subject? Forget it. I can't tell you how many Internationals and Diamond Reos I have accumulated. I don't have as many Transtar Eagles as I have Moebius F100s or Hudson Hornets, but give me a few more months and we might just see!

What got me into semi models, at first, was the challenge. I kept hearing about how fussy those old AMT truck kits were. But I have to say... I don't really see the big deal. A few truck modelers have this kind of superiority complex, and seem to think that they are better modelers who build other types of models. That's pure malarkey. Any model is only as challenging as you make it out to be. The only real difference between a kit with 300 parts and a kit with 30 parts is that on the 300 part kit, you're gluing more stuff together. Really. That's the only difference I see. Yes, some truck kits can be a pain in the bum to wrestle together, but some are an outright pleasure. Same as with any other type of subject I've built. So, while I expected a challenge, I stayed simply because I enjoyed it. The experience was a lot of fun.

A kit of a big rig subject inherently includes more detail, just on account of it's size. While a kit manufacturer can get away with a one-piece "plate" chassis with everything molded to it if they're doing a '70 Chevelle, they can't really get away with that on something like a Peterbilt highway tractor.

But I have to say the real appeal (for me) of these kits is variety. Yes, you can build, say, a '67 Mustang in a variety of ways. But with a standard semi tractor, you can pretty much go in any direction you want. That AMT California Hauler could, with a little work, become practically any Unilite-era Peterbilt you want it to be. There are so many choices as far as engines, axles, wheel and tire combinations, etc.. Most manufacturers had more than one BBC (and thus more than one hood length), set back axle configurations, sleeper options, and the like. And what do you want on the back? Anything from a simple fifth wheel to a two-bedroom combination car hauler is possible. There aren't as many limits, and that's before you consider building something custom. And in that case, all bets are off.

If you don't let the complexity scare you away... like I said, you're just gluing more parts together... a big truck model is an impressive addition to any display shelf. The same basic modeling skills and tools you'd use to build a 1:25 Corvette, 1:48 P51 Mustang, or 1:35 Abrams tank will serve you just as well on a 1:25/1:24 truck. Try it, you might like it!