From Wikipedia- "The Republic Motor Truck Company was a manufacturer of commercial trucks circa 1913 - 1929, in Alma, Michigan. By 1918, it was recognized as the largest exclusive truck manufacturer in the world, and the maker of one out of every nine trucks on the roads in the United States.[1] It was one of the major suppliers of "Liberty trucks" used by American troops during World War I."

I pondered what may have happened had the merger with LaFrance still happened, and while ALF continued its focus on emergency vehicles, Republic would handle the commercial truck/tractor business. This thought, and an incomplete AMT ALF pumper kit were the beginning of the project. I assumed that ALF and Republic would share major components to cut costs, so that the trucks might strongly resemble each other. That made my task a bit easier, too, as about all I had to do was rework the existing ALF parts.

The CTC (Compact Tilt Cab) series was introduced in early 1958,  and was designed to be a direct competitor to the tilt-cab White, which was quickly becoming a popular medium duty with several operators. It was also in competition with the Ford C-Series, though Republic execs realized that making a dent in the then one-year-old Ford design would be a tall order. The CTC quickly found a following among urban fleets and in the refuse industry.

At launch time, the CTC could be ordered with literally any engine the customer desired. A few early models even left the factory with Chrysler Firepower Hemi V8s! As time wore on, though, more customers requested the availability of the Detroit V8. Though ALF did use this engine in their 800 series units (upon which the CTC was based), due to the way the Republic tilt cab was laid out, this engine would not fit in a standard CTC. In late 1972, Republic plucked an unfinished CTC-8500 from the line, painted it in the traditional black/yellow/green paint scheme, and, after several modifications to the doghouse and raising the cab approximately 4", installed a Detroit 8v71 engine. This prototype was then sent to the Lansing, Michigan terminal of Outward Bound Truck Lines for "real world" testing and evaluation purposes. There it would be subjected to a great deal of urban driving, punctuated with several open highway jaunts. Once a week, the CTC was driven from Lansing to the Republic factory in Alma on US-127, and Republic's engineering team would perform a series of tests and inspections. Then, it was back to work in Lansing. After one year of testing, the Republic engineers had amassed a great deal of usable data.

Drivers complained of the tractor's nose-heaviness, and the cramped interior. Republic determined that both problems could be solved by adding an additional 10" in length to the cab behind the doors. This would allow for a smaller doghouse, as well as enabling Republic to install the engine/transmission further to the rear. Raising the cab another inch would be beneficial as well. These changes made their way onto all CTC series models beginning in late 1974, at the same time the 8v-series Detroit diesels became a regular option.

The CTC Detroit prototype's power and light weight combined to make it quite a sprightly performer, too. After only a week or so at the Outward Bound terminal, the OB drivers had nicknamed the tractor the "Hemi Cuda" on account of it's impressive power-to-weight ratio.

Here is how the Detroit-powered CTC-8500 appeared upon it's return to Alma after it's one-year test run with OB had ended. A little dirty, a little beat, but otherwise no worse for wear. Nobody knows what became of this CTC after it had done it's duty. Some people say it was scrapped, some people say it's still tucked away in the warehouse on the outskirts of town. There are even claims that a local truck collector has it stashed away in a dark shed somewhere in the Saginaw Bay area. Wherever it is, or isn't, the Detroit CTC-8500 was an interesting story of a small company doing what it had to do to stay afloat in a cutthroat market. 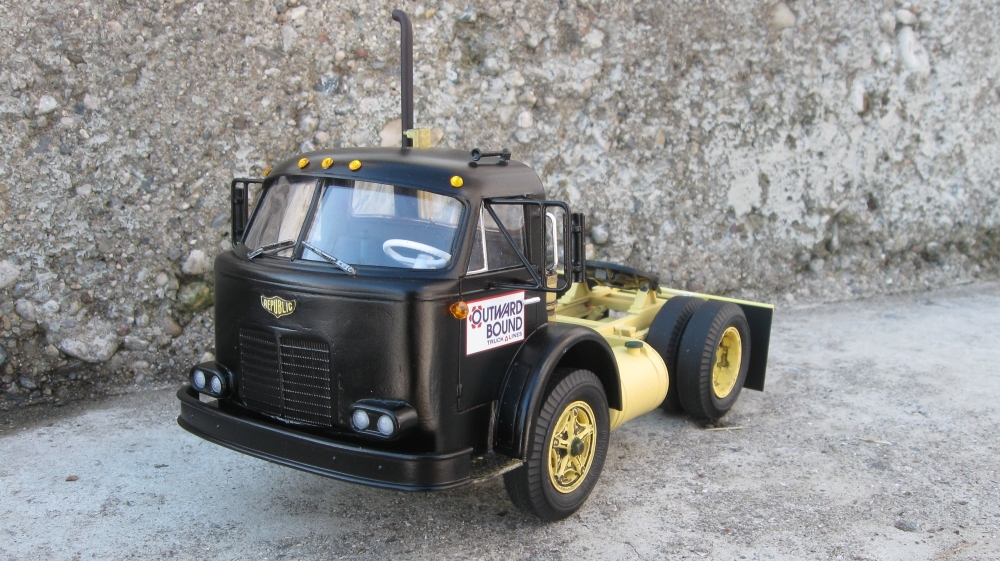 Here, the resemblance between the Republic CTC Series and the ALF 800 can be seen. 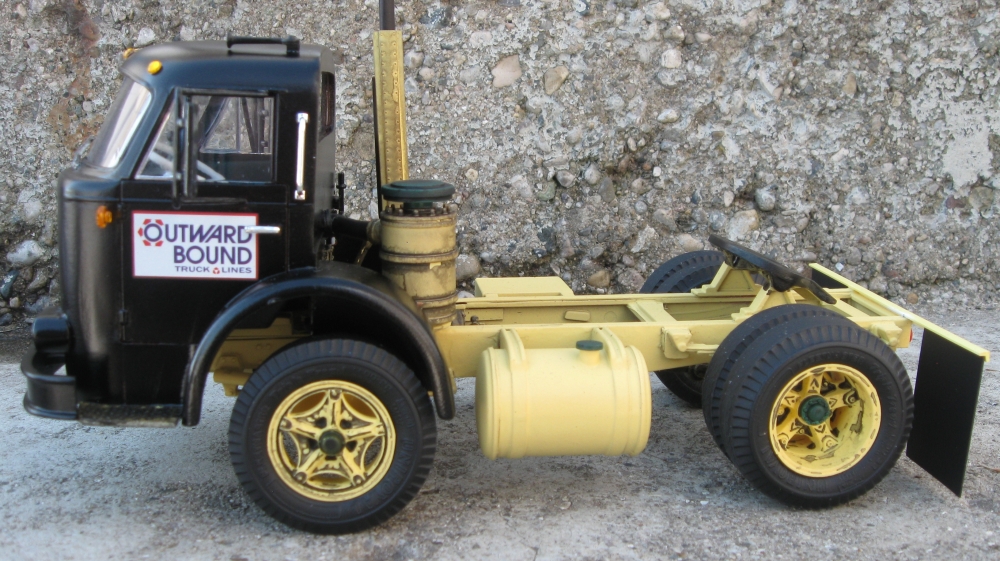 Republic's engineers mounted the prototype cab several inches forward of it's normal position in order to fit the Detroit 8v71 engine. Though not the most aesthetically pleasing solution, it did help. Production models had a longer cab and revised mounts and hinges. 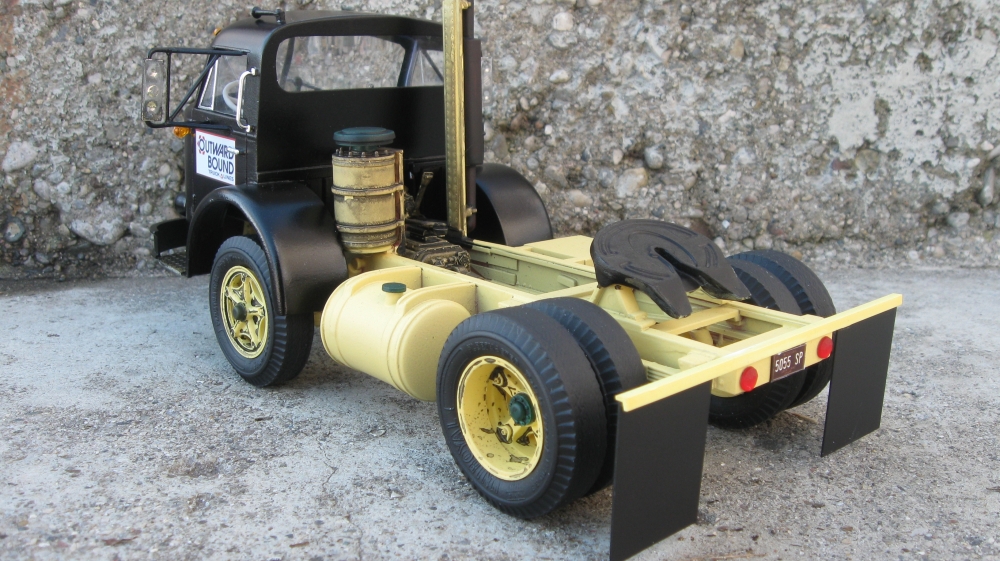 Republic trucks never were meant to be pretty... other than the customary Republic paint scheme this one is all-business. 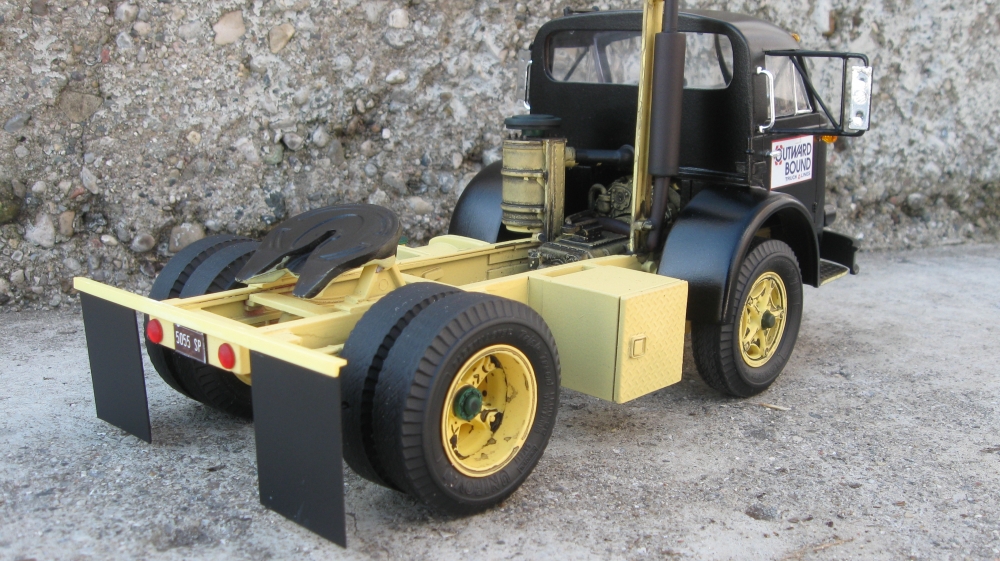 All CTC tractors ordered with a single fuel tank came standard with a 24" square tool box mounted to the passenger's side.