I think everybody has that one special truck or tractor that just jumps out at them. When talk turns to "all-time favorites", we all have one that stands out above all the others. For me, that bogey is the Diamond Reo Raider. While I like both versions of the Raider, I tend to lean more toward the set-back front axle type. There's just something about that broad, tall grille, blunt bumper, and the slope of those square-ish fenders that just "nails it" for me.

Think of the Raider as kind of what the International LoneStar is today... basically, the LoneStar is a ProStar with a unique hood, bumper, and more lux features, right? Well, that's essentially what the Raider was. Underneath the skin, it was standard fare Diamond Reo, but offered a unique look and exclusive options.

The Raider was the flagship of the brand during the years it was owned by Alabama resident Francis Cappaert, who had purchased Diamond Reo from the White Motor Company in 1971. However, the company soon found itself in financial hardship. Just around the time the Raider was going into production, Diamond Reo filed for bankruptcy. The following year the company was taken over by Pennsylvania's Loyal Osterlund. The Raider disappeared, along with the compact tilt cab Rouge model. Fewer than 50 Rouges were ever built, and the Raider was in production for less than a year. Under Osterlund, Diamond Reo focused on custom-built heavy trucks and tractors, and it was during the Osterlund years that the iconic Giant was released. Some 150 trucks were produced each year, to customer's orders, until 1995, when the Diamond Reo name ceased to exist.

Today, when you mention the name Diamond Reo, most people will respond with either a blank stare, or "Yeah... aren't they a country band?"

Anyway... back to the story at hand. Like I said, I just love the way the set-back Raider looks. That front end, the classic lines of the Driver Cab (originally an Autocar design dating back to 1950) are great enough on their own, but set it up on spoke wheels and a short wheelbase, and all those traits conspire to create one brutish looking machine.

I have only ever seen one Raider in the flesh. It is owned by a local salvage yard- they use it to transport their auto crusher. The owner of the yard had a Diamond T many years ago, and when the opportunity came to purchase the Raider, he jumped on it.

This Raider is a typical Michigan Special. Okay.... I hear some of you saying "What is a Michigan Special"? Basically, it is a short-wheelbase tractor, set up to haul heavy loads.... up to 75 gross tons on eleven axles. Years ago Michigan law dictated a short wheelbase for certain applications. Now, there are no restrictions on wheelbase. But during the years of more stringent laws, the short, dual-drive tractors were a common sight. Front axle capacities of up to 20,000 pounds were allowed, so in many cases flotation tires were used on the steer axle. Many had cast spoke wheels and double frames, and more than a handful had hand-painted scrollwork and numbered flags.   In fact, I'd be willing to bet quite a few truckers would argue it's not a "real" Michigan Special without such graphics, regardless of how it's spec'd out!

Of course, I've always wanted to build a model of a Raider, in set-back, Michigan Special form. I always have an AMT Diamond Reo kit or two on hand, and I recently obtained a very old Frank Gortsema resin casting of a set-back Raider. And after spending a few minutes poking around the salvage yard's Raider, I had a pretty solid idea of what I wanted... 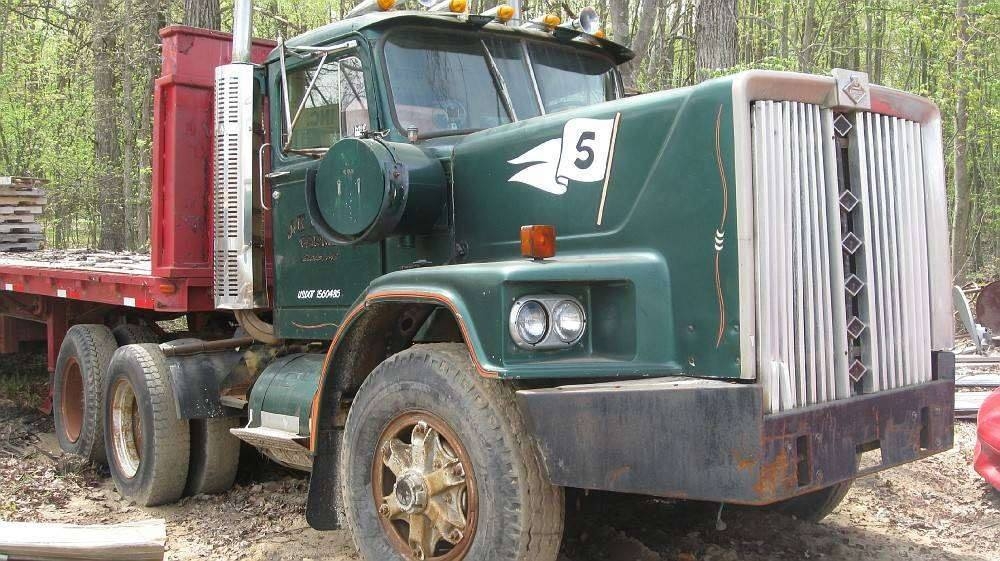 I opted not to do a full-on replica, more of a lookalike.

The old slush-casting had a weak roof, so the cab was cut away and replaced with an AMT piece. The inconsistent thickness and sheer weight of the hood led me to attach it to the cab, rather than try for a tilting hood. Another detail is the grille- on the real Raider, the grille frame tilts with the hood, while the vertical bars and diamonds (insert) stay vertical, attached to the radiator core support. The casting lacks the holes in the bumper- given the nature of the old, brittle resin, I opted not to cut them into the bumper for fear of shattering it. I think the fact that this was built using the vintage Gortsema castings adds to the overall "feel" of the model... almost like it has a little scale modeling history built right into it. 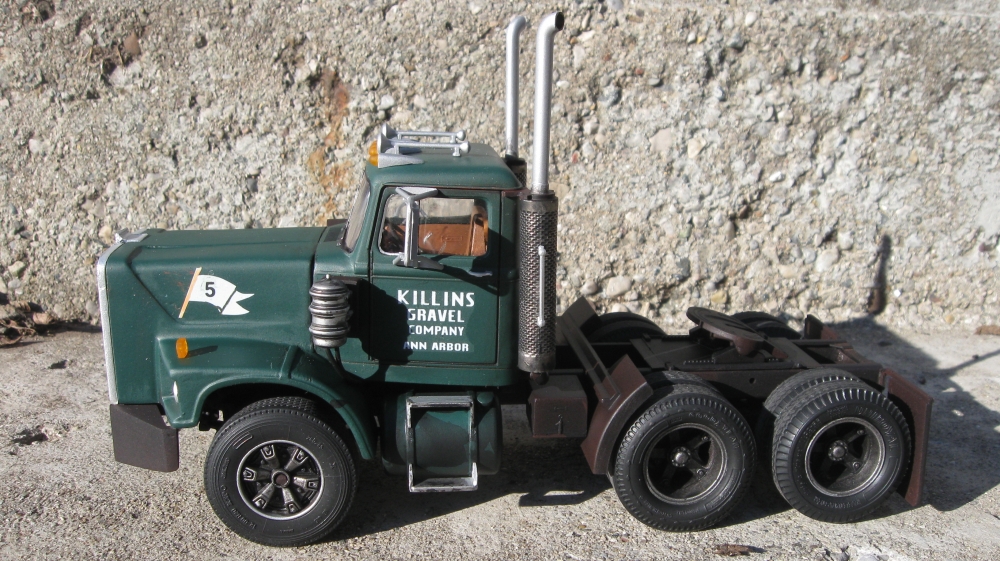 In this picture the "stubby-ness" of a Michigan Special tractor is evident. The kit battery boxes and tanks were used, just re-positioned a bit. I don't recall how much I cut out of the wheelbase- I just eyeballed things and hoped for the best. The front axle was also moved rearward. I robbed the exhaust stacks from an Italeri parts set. The entire model was weathered to appear as a tractor that was showing its age, but had been mostly well maintained. Also note it's wearing three different types of tires... Michelins on the front, Goodyears on the forward drive axle, and Uniroyals on the rear axle... apparently nobody told this Raider's skinflint owner about the dangers of mixing radials and bias-plies! This was done for two reasons. One... old rigs like this never have the same tires- the owner will typically run whatever is cheapest when the time comes to buy a new tire. And because the Michelins are just a bit taller than the kit supplied Goodyears, the middle axle would have been off the ground. This is also why I used the Uniroyals at the rear, they are just a tad shorter than the Goodyears. So, by going from tallest to shortest as I went rearward, I ensured that all ten tires would sit flat, and gave the tractor a slight tail-down stance... just perfect for a loaded trailer!

The flags were made from white decal film, hand painted and topped with a dry transfer number. I've had the door lettering for years, the decal graphics came from the original 1999 run of the Revell '41 Chevrolet pickup. Unfortunately, these graphics are not in the current "Trucks" reissue. Killins Gravel Company actually did exist at one time, and I've found quite a few old photos showing the site. No idea if they were still around in the '70's or if they ever had a Diamond Reo, but it's a model, so why can't I suspend reality just a tad?

During test fits the cab tilted to the rear a bit. I decided to keep the look- it gives the impression of broken-down cab mounts. I also went with a flat rear frame... the frame just plain ends after the mud flap brackets. It looks a little bare with no trailer lines back there, but I might get to that when/if I ever build a trailer for this. As a Michigan Special, it could pull pretty much anything, from a flatbed full of coiled steel bound for an auto plant, to a pair of end-dump gravel trailers. Seeing as how it's lettered up for a gravel pit, I'd imagine I'll have to gunk up a gravel dump for it. I guess we'll see.

Anyway, that's about it, I hope you enjoyed reading all that drivel. Now if you'll excuse me, I have a forward-set Raider I need to get around to building....